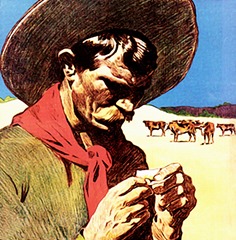 A little research into the life of Robert H. Tamplin produced some very interesting newspaper articles.  (All found at The Portal to Texas History.) When I first started reading, I wondered to myself if the family was known as the Tamplin Gang or something such as that.  It seems father R. F. and his two eldest sons, Robert and Rufus, were always involved in something.  And that something seemed to often be pushing up against the law.  Maybe even crossing it.

I will say there were some instances where Robert was accused of things and later acquitted, or found not guilty.  And I did come across a short article noting the Tamplin family to be well respected throughout Washington County, Texas.

Who knows? Maybe Robert’s life does typify the era of the 1800s wild, wild west.  Remember, anything happening after 1888 (at minimum) had a direct effect on his wife, Daisy Lincecum, who was just 23 when she married Robert.

PRETTY CLOSE. — On Wednesday, after Mr. R. F. Tamplin [Robert’s father] had been fined in the mayor’s court for unlawfully carrying a concealed weapon, he came up town and abused the officers who arrested him, and being warned by them several times not to create a disturbance, he displayed his pistol — which had been returned to him under the decision of the appellate court that no weapon should be confiscated — officer Buster informed Mr. Tamplin that he was doing wrong and to put the weapon in his pocket, or give it to his son.  He replied using abusive language, and the officers then arrested him, he showing fight.  His son Robert, about 17 years old, then drew and cocked on the officers a single-barrelled derringer pistol.  The city marshal grabbed him to prevent his shooting.  A scuffle ensued during which the derringer “went off” the ball entering a side-pocket in the marshal’s coat and severely wounding a pocket full of papers.  It was a very narrow escape.  Both parties were arrested and placed under bonds of $50 each for their appearance on Saturday next.

GIN BURNED. — On Friday morning Robert Tamplin’s gin in the Gay Hill neighborhood was discovered to be on fire.  In a short time it was in ashes.  The gin and machinery were new having lately been completed.  It cost about $3000 and was insured for $1800 in the Southern and Hibernian companies of New Orleans.

[Robert’s father was shot and killed May 1883.  This may have been a “family” gin, originally belonging to the elder Robert.]

Dismissed by the Grand Jury. DALLAS, Tex., December 4. — Mr. Robert Tamplin, of Brenham, who was arrested and brought here last Wednesday, charged with stealing some clothes in this city last August, has been dismissed by the grand jury, after a thorough investigation of the charge.  Mr. Tamplin belongs to a most respectable family in Washington, and is considered one of Brenham’s best citizens.

Two Severe Cuts. BRENHAM, Tex., Nov. 15. — A rather serious affair took place at the Santa Fe saloon at 2 o’clock this morning, in which several persons were seriously hurt.

R. S. Farmer and Dr. Rufus B. Tamplin [brother of Robert] had had a difficulty up town early in the night, in which, it is said.  Dr. Tamplin drew a knife, but did not attempt to use it.  Farmer did not see the knife, but some one told him of it, and he procured a pistol and followed the docdor [sic] down to the saloon.

Eye witnesses say that immediately on entering the saloon door Farmer drew his pistol and told Tamplin to “hand over that knife.” Robert Tamplin, a brother of the doctor, was standing at the bar drinking a glass of water.  When Farmer presented the pistol at his brother’s head he threw the glass and hit Farmer on the side of the head.

The pistol was discharged at the same instant, the bullet going through the side of the house.  Robert Tamplin, after throwing the glass, followed it up by clinching with Farmer and pushing him out of the door.

Leslie Greyton, a bystander, jerked Farmers’ [sic] pistol out of his hand, and Dr. Tamplin rushed out to help his brother.  He drew a knife and stabbed Farmer twice, once in the left arm, making a gash from the point of the elbow to the wrist.  Another slash fell on the back of the neck, extending from the edge of the hair on the right side in a slanting direction clear to the middle of the left side of the throat, missing the jugular vein only narrowly.

The latter  cut went to the bone and is rather serious.

Harry Swain, another bystander, struck Robert Tamplin over the head with a heavy cane, knocking him loose from Farmer and the row ended.

After the difficulty it was found that Farmer had two bad cuts.  Robert Tamplin had a gash on the head from the cane blow.  P. A. Henderson’s head had stopped the glass as it glanced from Farmer’s head, and a good-sized lump was the result.  Two or three others were slightly cut on the face and hands from bits of broken glass.

The Tamplin Case. The case of the State vs. R. H. Tamplin, charged with swindling, growing out of a mortgage made to Schmid Bros., on stock that Tamplin claimed died before the foreclosure and judgement against him, was called in the District court Friday morning, but Mr. Tamplin having gone out in the country about 16 miles was not able to get in on time and a forfeiture of his bond was entered, but upon his arrival at 10:15 the forfeiture of his bond was set aside, and the case went to trial.

Court adjourned until this morning, when the Judge will charge the jury in the case.

[Article in next day’s paper says jury returned a verdict of not guilty.]

A Fatal Fight. GEORGETOWN, Tex March 24. — Hightower, a boy 17 years of age was killed yesterday.  Hightower and Bob Tamplin, living near New Liberty Hill, quarreled in the morning about Hightower’s sheep eating Tamplin’s corn.  About noon Tamplin took his gun and left home, saying he was going to shoot squirrels.  Soon after this shots were heard.  Hightower was found dead and Tamplin wounded in the shoulder.  Hightower’s clothing and one ear were badly burned.  He was a shepherd on a ranch owned by Dock Davis of Round Rock.  Tamplin has a wife and one child.  He has been arrested.