Robert H. Tamplin was born 13 October 1895 in Georgetown, Williamson County, Texas to R. H. Tamplin and Daisy Lincecum.  Young Robert spent his pre-adult years working as a stock clerk for the Joske Bros. department store.  He also completed a relatively short stint in the U.S. Army.  By the time he was 27, Robert was working as a chauffer / taxi driver in the San Antonio area of Bexar County, Texas.

Robert married at least once, but was divorced at the time of his death.  His untimely demise occurred less than two months after his 37th birthday, and just two weeks before Christmas. The crime and possible subsequent solving of it played out in the newspapers:

Cab Found More Than Mile From Scene, No Witnesses Discovered

With a bullet wound in the back, the body of Robert H. Tamplin, 30, 306 North Street, was found upon the steps of the residence of Louis Granato, 410 Stonewall Street, Sunday morning, shortly after residents reported hearing a dispute and an automobile hastening away.  Granato telephoned the sheriff’s office there was a drunk man lying on the steps.

Mystery still clouded the shooting Sunday night as deputy sheriffs said they had been unable to find a clue and the fact that Tamplin’s watch, a ring and 80 cents in change was found on the body.  Residents of the house where the body was found could give no information as to how many men were in the party heard quarreling at the doorway and none had heard anything which was said.

Tamplin was a driver for the Yellow Line Company and was said to have left the office at 11:55 in answer to a call for a cab.  The call came from a pay station and person calling did not ask for any driver by name, it was declared, and simply requested that a cab be sent to the Riverview Apartments, 106 West Pecan Street.  Tamplin was not seen again alive by any one as far as the officers had found.

The cab which Tamplin drove was found early Sunday morning on South Flores more than a mile from the scene of the shooting, leaving officers to believe the man’s slayers had driven away in his own car and abandoned it later.  The car was not damaged.

Robert’s death certificate via FamilySearch.org lists cause of death as Gun shot wound in right side of Back.  It was noted as Homicide. 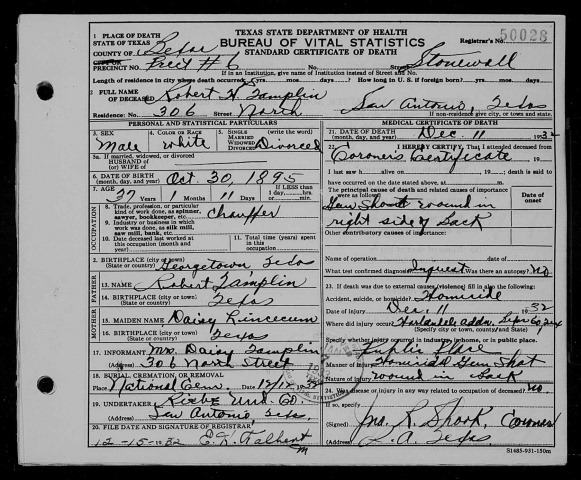 Robert was laid to rest at Fort Sam Houston National Cemetery in San Antonio, Texas.  A nice image of his government issued tombstone may be viewed on FindAGrave.  The inscription follows:

More About the Crime & Attempts to Solve It

Working upon the slender supposition that the slayer might have been a drug addict who sought money to buy narcotics, Sheriff Albert Hausser and his deputies Tuesday reported the rounding up of between 40 and 50 suspects overnight in an unsuccessful attempt to clear up the mysterious shooting early Sunday of Robert H. Tamplin, 37…

Tamplin, a taxi driver, was shot in the back as he sat at the whele. [sic]

RELEASE MANY.
The suspects were rounded up at several rooming houses and small hotels, but most of them had been released Tuesday morning.

…Finger prints on the taxicab were not those of Tamplin, it was ascertained Monday, but thus far no one taken prisoner in the round-up has had finger prints that match those found on the car.

SHOT IN BACK.
Tamplin was shot in the back, and the bullet which caused his death, a 38-caliber pistol bullet, was taken from his body, and is being held for evidence by Hausser, in the event his man-hunt unearths someone who owns a .38-caliber pistol, and is unable to give an account of himself for last Saturday night…

That Robert H. Tamplin, 37-year-old taxi-cab driver, of 306 North street, who was mysteriously slain last Saturday night, may have been “taken for a ride” by bootleggers, was a new angle of the case being investigated Thursday by Sheriff Albert Hausser.

Hausser disclosed late Wednesday that he had information Tamplin recently aided federal prohibition agents in making a big haul of liquor, by tirning in two bootleggers. He said that he had a tip that the bootleggers had arranged for the killing of Tamplin, or had killed him themselves.

WITNESS FOUND.
He also disclosed that a witness had been found who said he had heard some loud talking in a parked car, and then heard a voice say:

“Take that,” and a pistol shot quickly followed…

DEPUTIES ARE EXONERATED IN GILL SLAYING

Woman Arrested After Bank Bandit Suspect Was Killed Is Taken Back to San Antonio.

Deputy Sheriffs George Andrew, E. T. Dinkins and Phil Traweek were exonerated by the Harris County grand jury Monday for their part in the shooting on the sixth floor of the Ben Milam Hotel, Saturday night, in which Handsome Frank (Fred) Gill, 20, was wounded four times and instantly killed when he “shot it out” with the officers.

…The officers went to the hotel to arrest Gill on receipt of information from San Antonio that Gill was wanted there on a bank robbery charge and was registered at the Ben Milam.

…E. A. (Jack) Bragg, 24, purported to be Gill’s “pal,” who was arrested in Dallas Saturday night shortly before Gill was killed in Houston, was being returned to San Antonio from Dallas Monday.

In the meantime, Associated Press dispatches from San Antonio indicated that an investigation was under way to link Bragg and Gill with a two-man crime wave there of more than a month’s duration, including the slaying of a taxicab driver.

…Comparison of an empty cartridge found in Miss Knippa’s [woman with Gill at time of his killing] room in San Antonio by deputy sheriffs with the bullet found in the body of Robert H. Tamplin, taxi driver, who was shot to death the morning of December 11, leads the sheriff to believe that the two men knew something of this crime…

San Antonio Light reports on same day the following: “With the slaying by officers at Houston of Frank Gill…, and the capture at Dallas of E. A. (‘Jack’) Bragg…, officers believe they have cleared up mystery of the holdup Thursday of the First State bank at South San Antonio, and the murder December 10 of R. H. Tamplin, taxi driver, as well as several other crimes. Both were charged with recent Plaza hotel holdup, and were at liberty under bond.”