Fernandella “Della” Brazoria Lincecum was born 3 July 1840 in Lowndes County, Mississippi to Garland R. Lincecum and Emmaline Jones. By the time Della was six years old, Garland had moved his family to Caldwell County, Texas. This is where she would marry John C. Roberts, son of Alexander and Sabra, on 9 August 1857.

Della and John would eventually have seven children, 6 boys and 1 girl:  Jacob Garland, Alexander, Daniel Brazos, Louada, James T., John B. J., and Sullivan Ross. At least two of her sons would have her listed on their death certificates as Della Linscomb.

Fernandella Lincecum Roberts died at the age of 93 years on 9 September 1933 in San Antonio, Bexar County, Texas.  She was laid to rest in Lincecum-Roberts Cemetery, the sacred land first owned by her father, in Caldwell County.  50+ years went by without a tombstone to mark Della’s grave.  Roberts descendants got together and gave her one some time around 1985.  An image of this granite marker is available on FindAGrave. 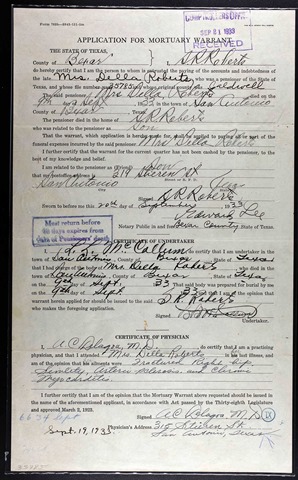 The Family Saga: A Collection of Texas Family Legends