They who knew him best will bless his name
and keep his memory dear while life shall last.
(Inscription on John’s tombstone)

John C. Roberts was born on Christmas Day of 1837 in Winston County, Mississippi to Alexander Roberts and Sabra Vise.  Alexander Roberts [first] came to Texas in 1836, and helped the Texans fight the battles of the Republic for nearly four years, being in many engagements with the enemy, the most noted of which was the Plum Creek fight. This was written in a book by Dan W. Roberts, son of Alexander and brother of John C., titled Rangers and Sovereignty (first published 1914).

Sabra, on the other hand, thought the Texas frontier unsafe for her family.  She, more than once, returned with her children to Mississippi. The family, all together, finally settled at what soon came to be Caldwell County about 1843.

John C. was one of three Roberts boys to marry three Lincecum girls. His choice was Fernandella Brazoria “Della” Lincecum (1840-1933), daughter of Garland R. Lincecum and Emmaline Jones. They were married 9 August 1857 at Caldwell County. The couple went on to have six sons and one daughter: Jacob Garland, Alexander Chalmus, Daniel Brazos, Louada, James Travis, John B. J., and Sullivan Ross.

John C. Roberts was a farmer, and during the Civil War, a cattle driver. He died 25 March 1919 at his home “8 mi east of Lockhart” in Caldwell County, Texas. John C. was buried in Lincecum – Roberts Cemetery, sacred land originally owned by his father-in-law. 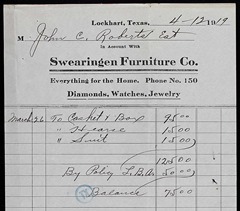 The Ranger & His Wife:
Two Accounts of the Early Days of the Texas Rangers by a Married Couple
(As an Amazon Associate I earn from qualifying purchases.)