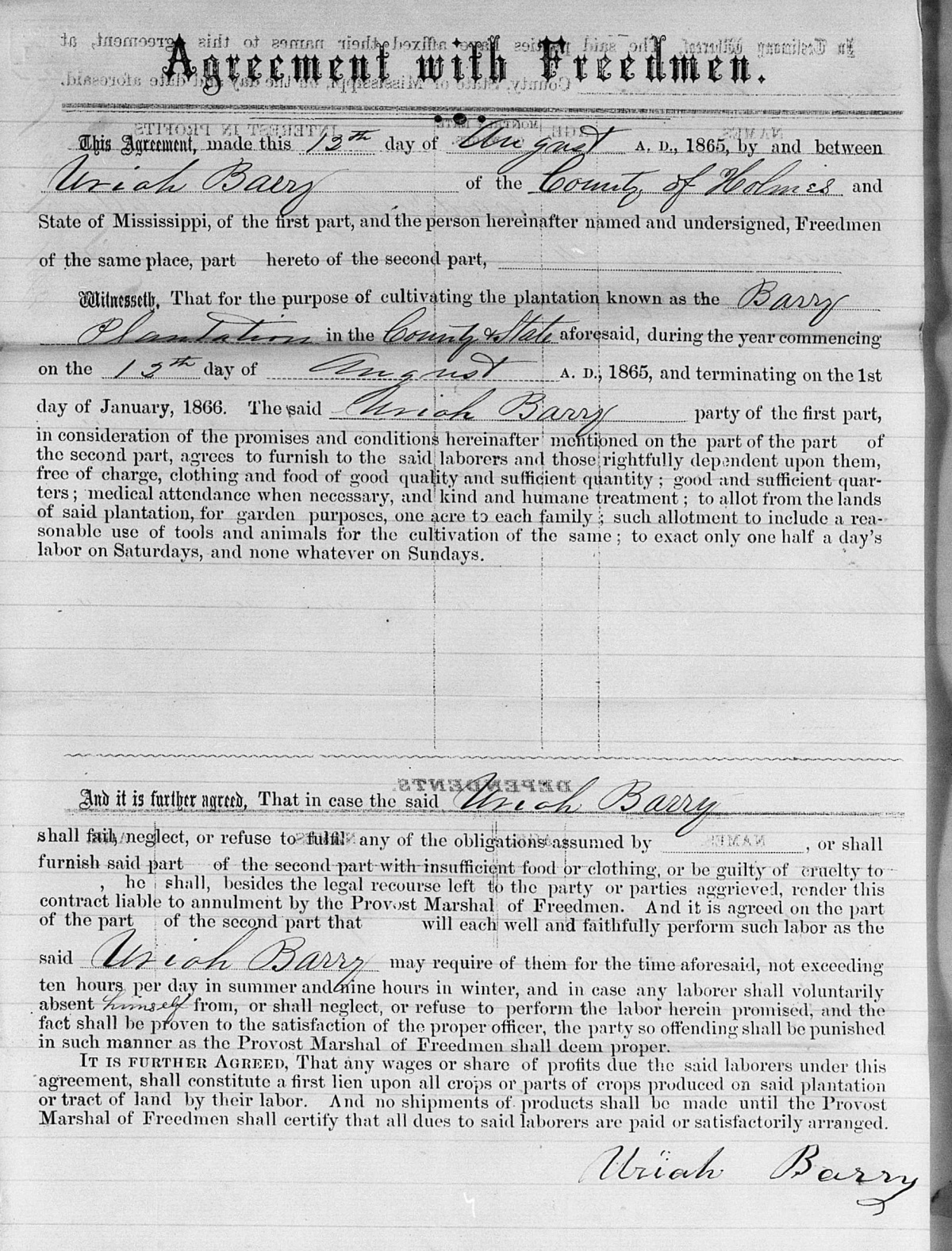 Even though Mississippi’s infamous “Black Code” would not be passed for a few more months, this labor contract between Uriah Barry and thirteen recently emancipated men, women, and children shows that life was not much different for them in the months (and years) immediately following the Civil War.

This Agreement with Freedmen was especially interesting to me because it was created so soon after the end of the Civil War.  All the men, women, and children who signed on to be laborers on the Barry Plantation in Holmes County, Mississippi carried (possibly without choice) the surname of BARRY.  And the number of freedmen in the document (13) is the same number of individuals counted as enslaved of Uriah Barry for the 1860 U.S. Federal census.  Their pay under this “new” contract? Board, Clothing & Medical Attention.

The names of those who were (possibly, probably) enslaved by Uriah Barry just months before:

Those aged 15 and above signed with a mark of X.  A list of “Dependents” follows:

Uriah Berry/Barry was my 1st cousin, 7x removed.  He was a son of Nancy Lincecum and William Green Berry.  A transcription of the agreement follows, but note images of this document may be viewed online at FamilySearch.org.

This Agreement, made this 12th day of August A.D., 1865, by and between Uriah Barry of the County of Holmes and State of Mississippi, of the first part, and the person hereinafter named and undersigned, Freedmen of the same place, part hereto of the second part, ——–

Witnesseth, That for the purpose of cultivating the plantation known as the Barry Plantation in the County & State aforesaid, during the year commencing on the 12th day of August A.D., 1865, and terminating on the 1st day of January, 1866.  The said Uriah Barry party of the first part, in consideration of the promises and conditions hereafter mentioned on the part of the second part, agrees to furnish to the said laborers and those rightfully dependent upon them, free of charge, clothing and food of good quality and sufficient quantity; good and sufficient quarters; medical attendance when necessary, and kind and humane treatment; to allot from the lands of said plantation, for garden purposes, one acre to each family; such allotment to include a reasonable use of tools and animals for the cultivation of the same; to exact only one half a day’s labor on Saturdays, and non whatever on Sundays.

And it is further agreed, That in case the said Uriah Barry shall fail, neglect, or refuse to fulfil any of the obligations assumed by ________, or shall furnish said part of the second part with insufficient food or clothing, or be guilty of cruelty to, he shall, besides the legal recourse left to the party or parties aggrieved, render this contract liable to annulment by the Provost Marshal of Freedmen.  And it is agreed on the part of the part of the second part that will each well and faithfully perform such labor as the said Uriah Barry may require of them for the time aforesaid, not exceeding ten hours per day in summer and nine hours in winter, and in case any laborer shall voluntarily absent himself from, or shall neglect, or refuse to perform the labor herein promised, and the fact shall be proven in such manner as the Provost Marshal of Freedmen shall deem proper.

IT IS FURTHER AGREED, That any wages or share of profits due the said laborers under this agreement, shall constitute a first lien upon all crops or parts of crops produced on said plantation or tract of land by their labor.  And no shipments or products shall be made until the Provost Marshal of Freedmen shall certify that all dues to said laborers are paid or satisfactorily arranged.

Go here for a specific example of a southern state’s Black Code.

The Republic for Which It Stands:
The United States during Reconstruction and the Gilded Age, 1865-1896