Even though Mississippi’s infamous “Black Code” would not be passed for a few more months, this labor contract between Uriah Barry and thirteen recently emancipated men, women, and children shows that life was not much different for them in the months (and years) immediately following the Civil War.

This Agreement with Freedmen was especially interesting to me because it was created so soon after the end of the Civil War.  All the men, women, and children who signed on to be laborers on the Barry Plantation in Holmes County, Mississippi carried (possibly without choice) the surname of BARRY.  And the number of freedmen in the document (13) is the same number of individuals counted as enslaved of Uriah Barry for the 1860 U.S. Federal census.  Their pay under this “new” contract? Board, Clothing & Medical Attention.

The names of those who were (possibly, probably) enslaved by Uriah Barry just months before:

Those aged 15 and above signed with a mark of X.  A list of “Dependents” follows:

Uriah Berry/Barry was my 1st cousin, 7x removed.  He was a son of Nancy Lincecum and William Green Berry.  A transcription of the agreement follows, but note images of this document may be viewed online at FamilySearch.org.

This Agreement, made this 12th day of August A.D., 1865, by and between Uriah Barry of the County of Holmes and State of Mississippi, of the first part, and the person hereinafter named and undersigned, Freedmen of the same place, part hereto of the second part, ——–

Witnesseth, That for the purpose of cultivating the plantation known as the Barry Plantation in the County & State aforesaid, during the year commencing on the 12th day of August A.D., 1865, and terminating on the 1st day of January, 1866.  The said Uriah Barry party of the first part, in consideration of the promises and conditions hereafter mentioned on the part of the second part, agrees to furnish to the said laborers and those rightfully dependent upon them, free of charge, clothing and food of good quality and sufficient quantity; good and sufficient quarters; medical attendance when necessary, and kind and humane treatment; to allot from the lands of said plantation, for garden purposes, one acre to each family; such allotment to include a reasonable use of tools and animals for the cultivation of the same; to exact only one half a day’s labor on Saturdays, and non whatever on Sundays.

And it is further agreed, That in case the said Uriah Barry shall fail, neglect, or refuse to fulfil any of the obligations assumed by ________, or shall furnish said part of the second part with insufficient food or clothing, or be guilty of cruelty to, he shall, besides the legal recourse left to the party or parties aggrieved, render this contract liable to annulment by the Provost Marshal of Freedmen.  And it is agreed on the part of the part of the second part that will each well and faithfully perform such labor as the said Uriah Barry may require of them for the time aforesaid, not exceeding ten hours per day in summer and nine hours in winter, and in case any laborer shall voluntarily absent himself from, or shall neglect, or refuse to perform the labor herein promised, and the fact shall be proven in such manner as the Provost Marshal of Freedmen shall deem proper.

IT IS FURTHER AGREED, That any wages or share of profits due the said laborers under this agreement, shall constitute a first lien upon all crops or parts of crops produced on said plantation or tract of land by their labor.  And no shipments or products shall be made until the Provost Marshal of Freedmen shall certify that all dues to said laborers are paid or satisfactorily arranged.

Go here for a specific example of a southern state’s Black Code.

The Republic for Which It Stands:
The United States during Reconstruction and the Gilded Age, 1865-1896

I know very little about the wives of Haywood Lincecum, so figured it would be easy enough to combine them into one post.

Mary Ann Brown and Haywood were married 3 January 1850 at Noxubee County, Mississippi.  She was born about 1827-1828, possibly in South Carolina.  Mary A. and Haywood had at least one son, Olympus Lincecum (1851-1938).  This family can be found in the 1850 and 1860 census for Oktibbeha County, Mississippi.  Mary A. presumably died before Haywood married again, so prior to 1869.

Mary E. Perkins and Haywood were married 21 February 1869 in Oktibbeha County, Mississippi.  Mary E. brought children from a previous marriage to the family.  She was born about 1833, possibly in Tennessee.  Mary E. and Haywood had at least one daughter, Otelia Lincecum (b. abt March 1870).  This family can be found in the 1870 Oktibbeha County, Mississippi Federal census.  Mary E. presumably died before Haywood married again, so prior to 1873.

Elizabeth “Betsy” R. McIlwain/e and Haywood were married 21 January 1873 in Oktibbeha County, Mississippi.  She was born about 1840, possibly in South Carolina or Alabama, a daughter of Samuel and Susanah Conn McIlwain/e.  Elizabeth is listed with her parents for the 1860 Cherokee County, Alabama Federal census, and with Haywood for the 1880 Oktibbeha County, Mississippi Federal census.  Elizabeth and Haywood had at least one son, Orono Brooks Lincecum (b. 1874).

According to FindAGrave, Elizabeth died 27 March 1890.  She was laid to rest at Sanders Cemetery in Oktoc, Oktibbeha County, Mississippi.

Inquiring minds want to know. It seems the two are one, but please tell me your thoughts. I would especially appreciate a share if you believe there is conclusive proof one way or the other.

Travis Haywood Lincecum is named a child of Grabel and Wilmoth Lincecum in Grabel’s 1836 last will and testament made in Oktibbeha County, Mississippi. Much of the time, I find an individual presumed to be this son simply with the name of Haywood Lincecum. Then, at times, he is found as Haywood H. Here is a list of names come across in research, thinking Travis Haywood and Haywood H. are one in the same:

Haywood was born between 1824 and 1826 in either Alabama or Mississippi.  I lean toward Mississippi, though his father, uncles, and grandfather did stay for a bit in Alabama before settling in Mississippi.  Judy Jacobson’s Alabama and Mississippi Connections provides the following:

H. H. Lincecum has a tombstone at Soule Chapel Cemetery in Macon, Noxubee County, Mississippi. The birth date inscribed is 20 February 1824, and the death date is 9 April 1900.

– Haywood was a veteran of the Mexican War. [Judy Jacobson, Alabama & Mississippi Connections: Historical & Biographical Sketches of Families Who Settled on Both Sides of the Tombigbee River.] — According to his pension card, Haywood H. fought with “Armstrongs & Evans, Texas Rangers.” [United States Mexican War Pension Index, 1887-1926 at FamilySearch.org]

– According to a 1900 Macon Beacon, Heyward [sic] Lincecum, age 75 and a Mexican War veteran, died on April 9, 1900 leaving a son Brooks Lincecum and a sister Mrs. J. B. Cole. Ducianna Amanda Lincecum, also a named child in Grabel Lincecum’s will, married Josiah B. Cole 23 April 1854 in Noxubee County, Mississippi. 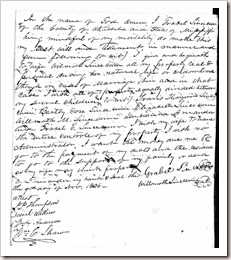 In the name of God Amen, I, Grabel Lincecum of the county of Oktibbeha and state of Mississippi being mindful of my mortality do make this my last will and testament in manner and form following to wit) I give and bequeath to my wife Wilmoth Lincecum all my property real & personal during her natural life or widowhood though in case of marriage then and in that case I wish all of my property equally divided between my several children.  To wit) Travis Haywood Lincecum Bartly Case Lincecum Elizabeth Lincecum Willmoth M. Lincecum Ducianna Amanda and Grabel E. Lincecum.  I wish my wife to have the entire controle [sic] of my property I wish no Administrator.  I want the money due me to go to the payment of my debts and the residue to go to the support of my family or used as my wife may think proper

The Ins and Outs of Probate for Genealogists: Research Guide
(As an Amazon Associate I earn from qualifying purchases.)